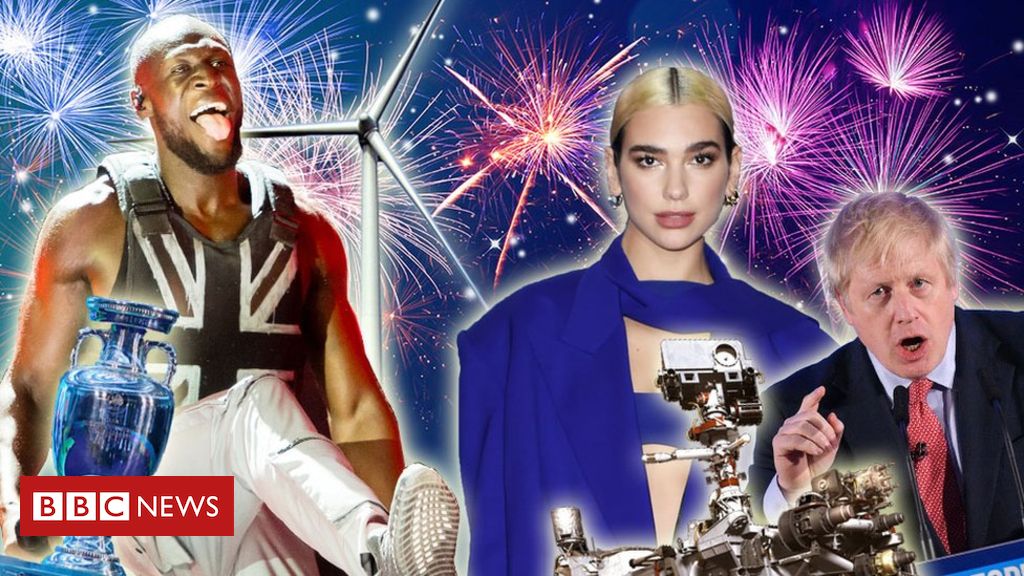 Fortunately, much of it will be positive.

It’s early days right now, clearly, but here are 20 things you can look forward to over the coming 12 months – and not just the fact that we’ll be living under a nice, round number on our calendar.

Only one of them is directly related to Brexit. So lets get started.

1. The Tokyo Olympics and Paralympics

It’s tough to recommend staying in and watching TV in the middle of summer, but this is the Olympics, so closing the curtains and grabbing the remote isn’t quite so frowned upon. This year it’s taking place in Japan between 24 July and 9 August, with the Paralympics keeping the spirit alive between 25 August and 6 September.

You won’t see Russia competing this year because it’s been banned from all major sporting events for four years by the World Anti-Doping Agency.

Athletes who can prove they are untainted by the doping scandal will be able to compete under a neutral flag, however.

2. Glastonbury will celebrate its 50th birthday

It’ll take a lot to top Stormzy’s headline slot in 2019, but considering Glasto is celebrating fifty years in the festival game, organisers will definitely want to try.

So far we know Taylor Swift and Paul McCartney are two of the headliners and Diana Ross is booked for the Sunday afternoon “legend slot”, but otherwise, there are still some big boots waiting to be filled.

3. The millions of trees we’re going to plant this year

If things go to plan, we might all be taking big gulps of much nicer oxygen next year, with plans to plant millions of trees across the world.

In 2019, the United Nations announced plans to plant forests in Asian and African cities to balance the damage done (mostly) by people living in cities.

This is a long-term plan but already there are social media stars like Mr Beast who, after a two-month campaign online, raised the money to plant 20 million trees.

Whether you were into grunge or girl-groups, you’re going to be getting a big dose of nostalgia this year, with bands from both ends of the spectrum getting back together to make some reunion coin.

Admittedly, My Chemical Romance’s 2020 activity is currently limited to a single gig in Los Angeles at the moment, but Pussycat Dolls are going to be all over the place with their comeback plans.

They’ve already teased new music in an X Factor performance and will be playing eight UK gigs in April this year.

Now, how do we get a memo to Girls Aloud to suggest they do something similar?

Why host a European football tournament in one city when you can host it in 12?

That’s what’s happening for Euro 2020, with games taking place in Glasgow and Dublin, plus the finals and both semi-finals in London.

It’s not looking too bad for the England team either – they’re currently the bookies’ favourites to win.

The 2019 election didn’t deliver the result everyone wanted but Boris Johnson’s 80 seat majority suggests his ‘Get Brexit Done’ message worked with a lot of people. And whichever way you voted, most would agree the total stalemate in parliament over Brexit has become mildly intolerable.

Mr Johnson has promised the UK will leave the European Union at the end of January – and the government is to add a new clause to the bill to rule out any extension to the transition period beyond the end of next year.

It’s possible you ended 2019 with a bit of election-fatigue, and there’s more to come this year – but this time, we can all watch from a safe distance.

President Donald Trump will be running for a second term in office (another four years in power) but will be doing so after facing impeachment proceedings by political rivals, the Democrats.

Saying it’s something to “be excited about” might be pushing things, but it will be a big moment in world politics. You’ve got until November to brace yourself.

Don’t tell Martin Scorsese, but 2020 is going to be a bumper year for superhero movies – from both Marvel and DC.

DC will be dropping Wonder Woman 1984 and Birds of Prey – putting their female characters at the heart of their 2020 plans.

Marvel’s got Venom 2 and Black Widow movies planned, with a number of new franchise also launching.

And if we’re really lucky, we’ll get the X-Men spin-off New Mutants, which has been gathering dust on Marvel’s shelves since its trailer premiered in 2017.

So if you’re not twerking at a Pussycat Dolls show somewhere, you’ll have loads to listen to.

10. All the new TV series we’ll get to watch

That dent in your sofa will be staying put, that’s for sure, because we’ve got new series of things like Killing Eve and The Handmaid’s Tale incoming.

There’s also the possibility of a fifth season of Stranger Things this year (although there’s new spooky Netflix show Locke & Key to fill the gap it would leave if not) plus things like the third and final series of Dark, to keep your supernatural senses tingling.

Then there’s the worldwide launch of Disney+, which will bring the first wave of Marvel TV shows to screens worldwide and the official UK premiere of The Mandalorian, mean Brits can finally get on-board with all those Baby Yoda memes.

For a lot of people, it’ll be time to shelve their PS4 and Xbox One this year, because both Sony and Microsoft are due to drop their new consoles in 2020.

12. New games for your old consoles

But don’t chuck your old console in the bin just yet – there are still loads of games coming out in 2020 that’ll you’ll want to play before moving on to the next generation.

There’s Keanu Reeves’ big budget RPG Cyberpunk 2077, a remake of Final Fantasy 7, Marvel’s Avengers and a sequel to zombie epic The Last of Us.

Plus there are new Doom, Dragon Ball Z, Animal Crossing, Half Life and even a Minecraft spin-off incoming.

13. Knowing the UK is powered by more renewable energy

The UK is following The Climate Change Act in its goal of cutting emissions by 80% before 2050, and this year is the first with targets – we need to be producing 15% of our power from renewable energy this year.

Our current relationship with the European Union may be coming to an end, but that doesn’t mean our annual placing in the bottom half of the Eurovision Song Contest results has to as well.

We came last in 2019 but that doesn’t mean millions of Brits didn’t tune in then – up to 7.7 million in the UK, apparently.

If you’re sick of politics you’ll be thrilled to know that moving to Mars will become more of a possibility this year.

NASA is sending a new probe to Mars, and as well as sifting through the dirt to see if anything lived there in the past, part of its mission is to assess the red planet for its suitability to host humans in the future.

The new probe will be joining NASA’s Curiosity probe on Mars, best known for being the first robot to ever take a selfie in space.

16. All the non-superhero movies you can watch

2020 already has some big movies scheduled such as a new Pixar film Onward, Disney’s live-action Mulan, new James Bond movie No Time To Die, another Halloween sequel, a Candyman remake written by the man behind Get Out, a third Legally Blonde and the third Conjuring film.

But perhaps most exciting of all, we’ll finally get a look at the Sonic The Hedgehog film, which was delayed because fans hated the CGI in its first trailer so much.

17. Revisiting your favourite albums (to make you feel old)

They’re all turning ten this year and that means we are all officially very old.

Also celebrating their decade in our headphones are The Suburbs by Arcade Fire, Thank Me Later by Drake, Body Talk by Robyn, Come Around Sundown by Kings of Leon, Disc-Overy by Tinie Tempah, Pink Friday by Nicki Minaj and Speak Now by Taylor Swift.

There was a lot of talk about climate change in the UK in 2019, but the conversation will be much more official this year.

Greta Thunberg was named Time magazine’s Person of the Year, climate change protests happened across the country and Extinction Rebellion shut down major cities to protest against the damage done by society and industry.

And at the end of this year, the UK will be the setting for one of the world’s biggest climate change discussions, when the United Nations climate change summit is held in Glasgow.

It should put the UK’s stance on climate change under the spotlight and on a platform for the world to see.

19. Winter Love Island (and other reality TV bits and pieces)

If you’re in need of some winter sun, then you’ll want to be in front of your TV in January, because Winter Love Island is happening and it’s happening soon.

Yes, you’ll be able to sit in your pyjamas in the dark watching very attractive people flirt in swimwear all month with the first of two series of Love Island that are happening this year.

And if the abs and catchphrases on Love Island aren’t camp enough for you, we’ve also got four series of RuPaul Drag Race confirmed for 2020.

We’ve got the twelfth series of the American show, the second series of the UK version, the fifth of it’s All Stars series and charity season, Celebrity Drag Race.

There’s a new form of cricket to look forward to in the summer: The Hundred.

It’s a new competition in which eight freshly formed teams, representing seven cities from around the UK, compete against each other.

Each team has both a men’s and women’s side, containing stars such as Ben Stokes and Jofra Archer.

The format of matches? That’s pretty simple: 100 balls per team, most runs wins.