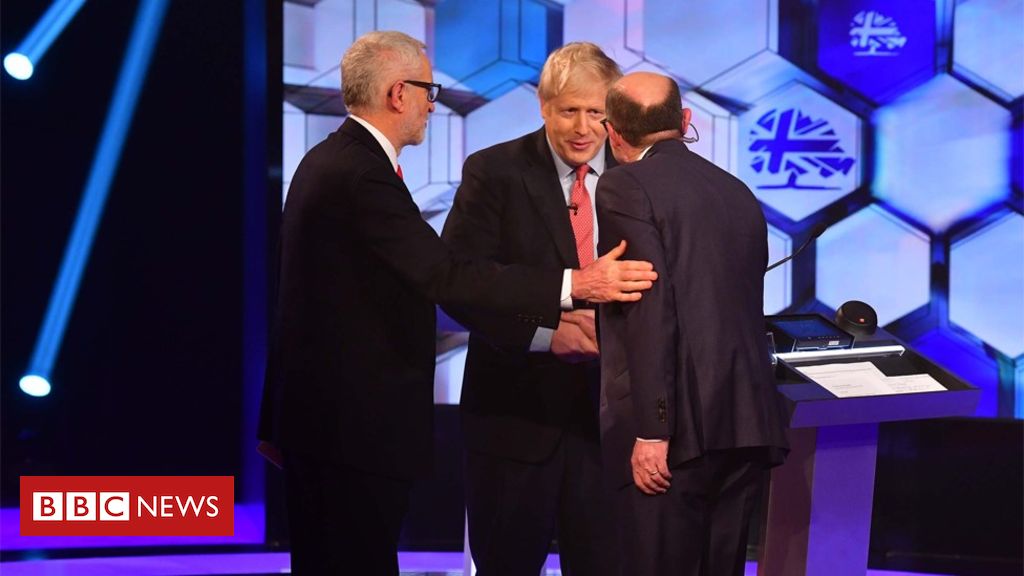 This head-to-head debate was touted as the last chance for both leaders to convince the public they are the best man for the job.

But after a tumultuous week for both Boris Johnson and Jeremy Corbyn, did either of them succeed?

We will find out for sure on 13 December, but for now, what were the key things from the 60-minute exchange?

Let’s be honest, it was always going to be a running theme in tonight’s debate, wasn’t it?

For Mr Johnson, his phrase of “get Brexit done” was used tens of times and seemed like his answer to most conundrums. There were a few awkward moments, though, when he used this tactic – for example, when saying the nastiness in politics that had seen MPs threatened could be ended by his deal. But the PM also got the backing of some audience members for his determination to put the whole issue to bed and move forward with his other priorities.

Mr Corbyn faced further scrutiny of Labour’s Brexit position – to negotiate a deal with the EU and put it to a referendum – and his own position of staying neutral in any campaign. He was attacked by Mr Johnson for his “failure of leadership” by not taking a side, and asked repeatedly about his beliefs. But like the PM, Mr Corbyn won over some of the audience with his pledge to bring the country together, whatever the outcome of another vote on the EU – which he thinks he can achieve as PM by staying neutral.

2. The influence of the ‘has-beens’

We have never seen an election where former prime ministers have intervened in quite the way they have this time. Rather than coming out for their successors, the likes of Sir John Major and Tony Blair have been condemning the leaders and questioning whether voters should back them – especially over their positions on Brexit.

In question one, we got our audience star in the form of John Purcell, as he asked whether such interventions were “worrying” to the party leaders. Or were the elder statesmen, Mr Purcell asked, “just a couple of old has-beens”?

The new kids on the block were polite to their predecessors, though happy to call them wrong.

Mr Johnson said he had the “utmost respect for all former Conservative leaders” “but I don’t think [Sir John] is right”. Instead he repeated that the Tories had an “oven-ready plan” for Brexit, and it would lead to a stronger future for the UK. For Mr Corbyn, both Mr Blair and Sir John were “welcome to make their comments”. But he “urged them to think for a moment of the reality of nine years of austerity” under the Tories before they cast their vote.

A quick question emailed by a far-flung audience member really got to the core of the difference between a vote for Mr Johnson and one for Mr Corbyn. Which of the philosophies – socialism or capitalism – had helped the poor the most, the absent questioner asked?

The Labour leader went first, “Socialism, carried out in a democratic way, in this country, Scandinavia and elsewhere, has raised the living standards”, he said, citing the post-war Labour government which created the NHS.

His rival then made the argument for capitalism, saying his “One Nation Conservatism” understood that having a “dynamic market economy was the only way in which you can pay for fantastic public services”. And that, he said, offered the “balance and symmetry” needed. But Mr Johnson then went on to condemn his opposite’s position, accusing Labour of wanting to “overthrow capitalism”, and calling such an attack on it “absolutely senseless”.

Mr Corbyn, however, replied: “My kind of socialism is one where you don’t leave people behind”. He then accused the Tories of allowing inequality to grow.

4. A question of punishment

There was a titter from the audience when the two leaders were asked what punishment they deemed suitable for lying during political campaigns.

Mr Johnson, to further audience giggles, called for such fibbers to be “made to go on their knees through the chamber of the House of Commons”. He then turned his phrase to poke fun at some of Mr Corbyn’s revelations, saying such politicians should be “scourging themselves with copies of offending documents that claim to prove one thing and prove something different”.

Mr Corbyn took a straighter approach to his answer, saying he wanted a “stronger, not weaker House of Commons to hold the government to account” – and hopefully one led by him. But he did get a hit back at Boris Johnson, saying there should be independent monitoring to “test statements on the side of a bus” for their validity.

Some of these debates have become a little rowdy in the run-up to the December poll as emotions have run high. This final head-to-head avoided the boos the leaders had sometimes encountered in the campaign, and remained calm. But it did raise applause.

It wasn’t only their policies that got the claps going though – such as the regular promise to get Brexit done, by Mr Johnson, and repeated pledges for the NHS by Mr Corbyn . It was the jibes. Mr Johnson laid into his counterpart on a number of occasions, accusing him of supporting the IRA, wanting to “break up the union” and “failure to take a stand” over Brexit.

But the Labour leader had his comebacks, and called for the PM to “show a degree of honesty” in his answers. The audience seemed to enjoy the bit of spice it added to the proceedings.

What are the parties promising you?

Here’s a concise guide to where the parties stand on key issues like Brexit, education and the NHS.