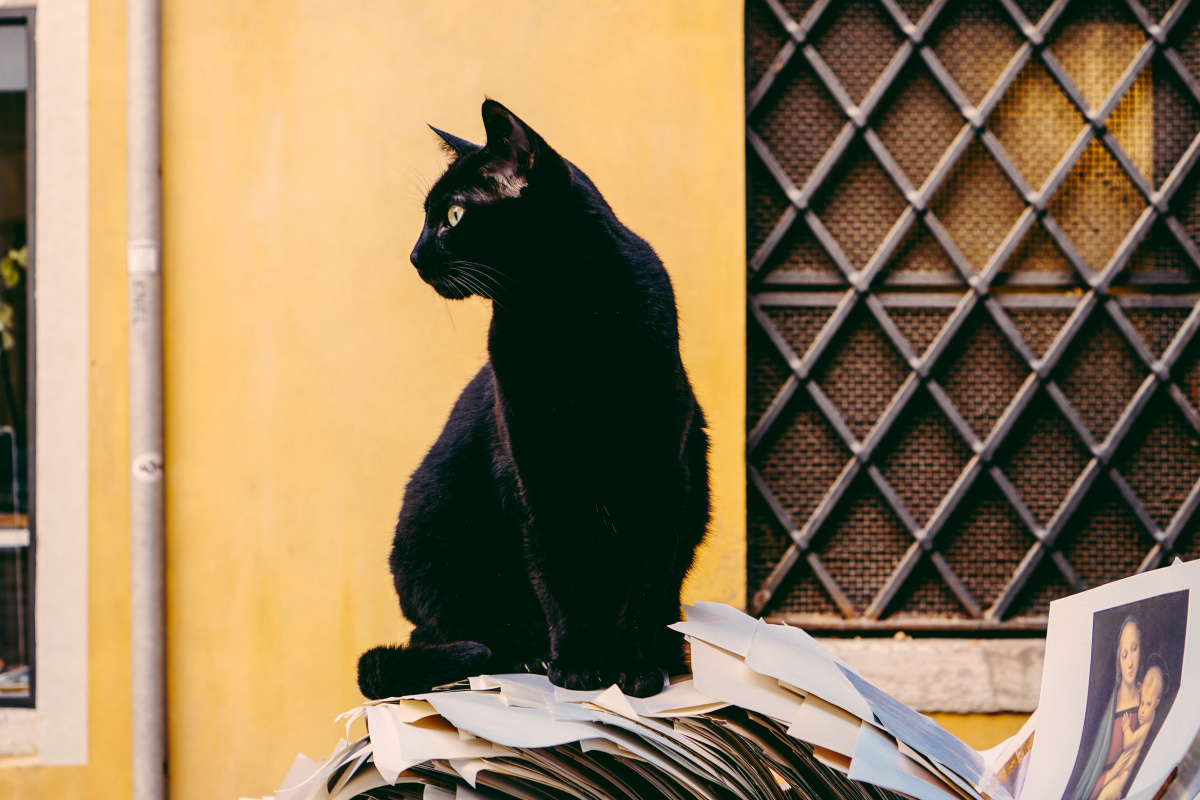 1. Middle names. People made middle names and then didn’t tell others what it was because in order to put a curse on someone you need their full name. If someone has a legal middle name and you don’t know it then you can’t curse them.

2. The fear of black cats comes from the 13th century when Pope Gregory announced to Europe that black cats were witches’ consorts with the devil. This led to mass cat genocide wherein not only black ones were being murdered in masses.

4. Dressing up at Halloween was to ward off ghouls by outsmarting them.

5. Pumpkins at Halloween were derived from a tradition of putting carved turnips outside to scare away a guy that tricked the devil.

6. The use of wind chimes. A lot of people forget that they were once a ward against evil spirits.

7. Covering your mouth when you yawn. It was originally thought the devil would sneak in if you didn’t.

8. Around here a lot of people learned that if you leave your flip-flops or shoes face down on the ground, your mother will die.

9. Making noise at midnight on New Year’s Eve to scare away the evil spirits.

10. Blowing out birthday candles. It’s not well known, but this stems from a tradition which paid tribute to the goddess Artemis and was thought to be auspicious.

11. Pretty sure death will come to me if I ever open an umbrella indoors. And when I see someone do it, I automatically wince because I know their life force is about to be taken from them.

12. Saying bless you when someone sneezes was originally ordered by a pope in the Middle Ages to ward off plague.

13. Not speaking ill of the dead. They’re not coming back to haunt you.

14. Clinking glasses and saying cheers before you take a sip of your drink. If I remember correctly, it used to be a thing in Feudal England where warring factions made peace with each other by clinking their huge beer/ale mugs, thereby spilling a bit of their drink into the other person’s mug to ensure they haven’t been poisoned.

15. Churchbells at a funeral are actually to ward off evil spirits who’d take the deceased’s soul to hell. I only know this because my grandmother explicitly didn’t want them at her funeral because it’s a pagan custom (according to her).

16. 666 is the devil’s number or that the pentacle and pentagrams are going to summon demons. Christianity is so seeped in Western cultures that we take basic things and turn them into fearful superstitions.

17. The purpose of bridesmaids was to confuse and protect the bride from being snatched by the fae? Snatched by something anyway.

18. Bad luck comes in threes. I usually see this in the context of celebrity deaths.

19. The devil… people in this century, people who wear suits and run political campaigns… believe that an evil spirit with horns is plotting to destroy them.

20. Nurses will murder people who say a shift is qui_t. We aren’t allowed to say the q word. (I don’t believe iy, but it’s fun to give each other hell about saying it or getting to blame someone when shit hits the fan.)

21. Wedding rings on your left ring finger – supposedly a vein there that goes directly to your heart, keeping your love symbol close to your heart and your marriage full of love.

22. I know a couple of Japanese ones. The more well-known is that the number 4 is a bit unlucky because it sounds like “death”.

You’re supposed to cover your thumbs from passing funeral cars. I don’t fully get it, something about the thumb being the parent finger and ghosts from the funeral car entering into your body.

Similarly, if you cut your nails at night, you won’t be with your parents weren’t they pass on.

23. Chinese people set fireworks off on new year to ward off evil spirits, since they invented them we could say the origin of fireworks was superstition?

24. For many “sit down” Chinese restaurants, like buffets, you have to turn left or right twice before actually getting into the restaurant. That’s to confuse demons.

25. Kissing on New Year – thought to purify each other of evil for the new year.

26. Holding your breath when driving by a cemetery.

27. Walking under a ladder. Suppose there are a couple of reasons not to do that.

28. Not sitting thirteen at one table; not having a thirteenth floor on an office building. My building just renovated one of their elevators and I was amused to see they had eliminated the number thirteen from the brand new control panel. Superstition dies hard.

29. Luck. You’ll find that just about everyone has little things they do in order to effect their luck; whether it’s avoiding cracks on sidewalks to ward off bad luck, or blowing on dice before a throw to bring on good luck.

30. Knocking on wood to make sure we don’t jinx anything.

These Spooky Stories Will Put You In The Halloween Spirit