Activists of all ages join actor in Washington for her fifth Fire Drill Friday, focused on the military 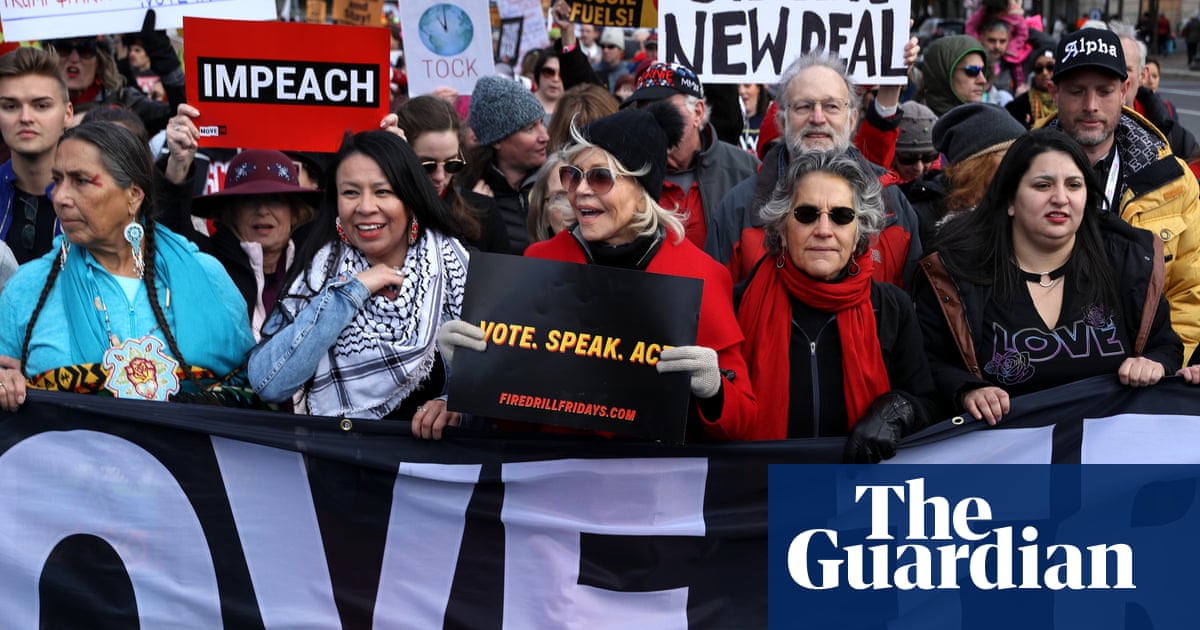 In front of the US Capitol, Fonda spoke of the urgency of the climate crisis and need for activism on an unprecedented scale.

We cannot leave it to young people to fight this fight for their future by themselves, Fonda said.

Donning her signature vivid red coat which she says will be the last she will ever buy, in an effort to be more sustainable she swayed and sang protest songs while embracing an anti-war activist, Jodie Evans, the co-founder of Code Pink.

Fonda, 81, has been leading protests at her Fire Drill Fridays for more than a month, and she has been arrested four times. Her climate action has followed the work of youth protesters around the world who have been striking from school on Fridays, including the 16-year-old Swedish climate advocate Greta Thunberg.

Fonda had not been arrested as of 3pm ET on Friday, but she is scheduled to appear in court over previous arrests later this month.

This weeks protest theme was about how the war and military contribute to the climate crisis. The US military is one of the biggest emitters of carbon in the world.

I started in the streets with Jane in 1970, 49 years ago. And Ive never ever seen her lose her passion or energy. Nobody works like Jane. She does put her body on the line and she is not afraid to be uncomfortable, Evans said.

Fonda is a longtime political activist with roots opposing the Vietnam war. She gained the nickname Hanoi Jane in the 1970s when she was photographed atop a North Vietnamese anti-aircraft gun on a visit to Hanoi. A conservative counter-protester, walking alone alongside those who marched with Fonda to the White House, shouted four more years, Hanoi Jane, at the group.

A large contingent of activists urging the impeachment of Donald Trump also joined the march, as did veterans of the Vietnam war.

At one streetcorner, the Fonda protest encountered a separate group marching in support of undocumented migrants who arrived in the US as children, known as Dreamers. The two crowds sang each others chants.

Fondas protest attracted teenagers and seniors alike. Two first-year college students said they had been introduced to Fonda through her Netflix show, Grace and Frankie, and were drawn to her climate message.

When you read climate studies and see Greta Thunberg and all of these other young activists at work, and then you see someone older also making an effort to try to do something about climate change, it just kind of compels you. You need to be there. You need to have your voice heard, said one of the students, TJ Boland.

But many of the protesters were at the march for more than the climate. They expressed frustration with a system of governance that they see as exploiting the poor and people of color in order to benefit the wealthy and corporations at the expense of the environment.

Julie Heffernan and Anne Landsman, two friends in their early 60s, traveled from New York City for the protest.

Ive been very angry ever since Trump was elected about the fact that we have somebody who is lacking in every quality that I consider as important for a leader, starting off with just basic decency. Hes a misogynist, hes a racist, he is just everything I despise, said Landsman, who came to the US from South Africa during apartheid.

The thought that Id emigrated and moved to a country that I thought was some bastion of decency and just see it just take this dive down has been incredibly upsetting.

Ruth Zalph, 89, who traveled from North Carolina, was protesting against the climate crisis and militarism. She said if money was spent on the military industrial complex, it could not be spent on ending poverty and fighting rising temperatures.

I have a great-granddaughter who is six months old, and Id like to see her grow up in a safe world where people are not having to fight for water and food, Zalph said at the beginning of a roughly two-mile march to the White House.