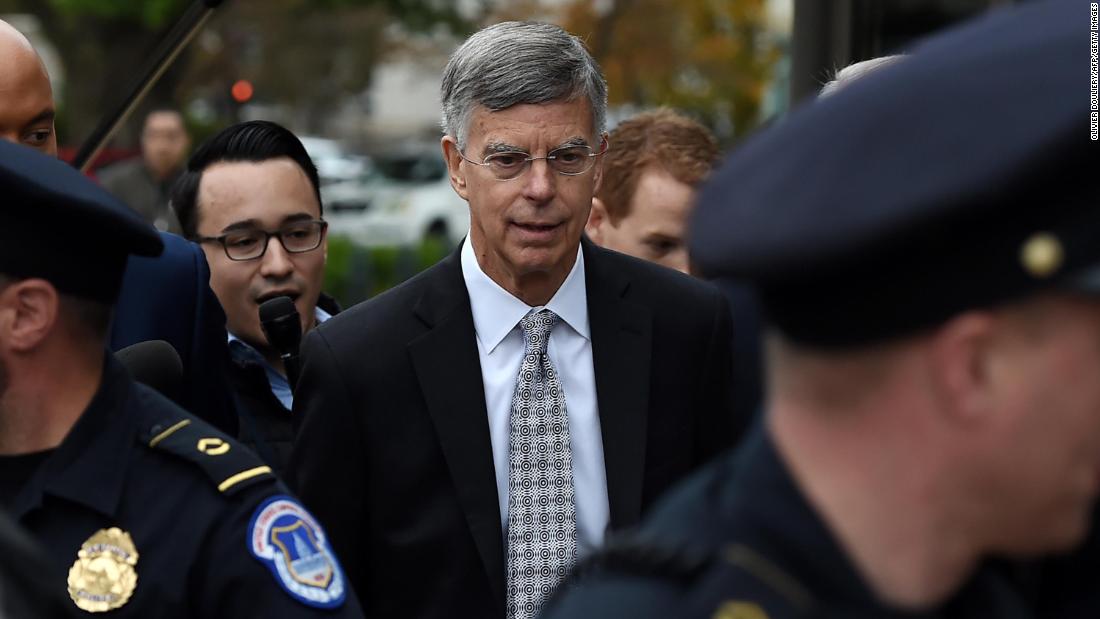 (CNN))A version of this story appears in CNN’s Impeachment Watch newsletter. To get it in your inbox, sign up for free here.

Bill Taylor, the top US official in Ukraine at the moment, didn’t need to have his memory jogged to remember the quid pro quo; he took detailed notes in real time and recited them back to impeachment investigators. And there’s no doubt in his mind that US military and security aid for Ukraine was contingent on that country launching investigations to help Trump in the US.
Taylor said the investigations President Donald Trump wanted into his rival Joe Biden would have equaled election meddling and that Ukraine announcing them was his nightmare. (More below on that.)
He also said the idea for the exchange came from Rudy Giuliani. Read the full story.

In text messages with Volker and Sondland, Taylor threatened to quit to prevent a “nightmare.” Read those exchanges here.
Here’s what he told members of Congress he was talking about:
“‘The nightmare’ is the scenario where President Zelensky goes out in public, makes an announcement that he’s going to investigate Burisma and the election in 2016, interference in 2016 election, maybe among other things,” Taylor told the House committees. “The nightmare was he would mention those two, take all the heat from that, get himself in big trouble in this country and probably in his country as well, and the security assistance would not be released. That was the nightmare.”

What else Taylor said

Here’s the synopsis from our reading team, which has been breaking down what we learned from the Taylor transcripts:

Taylor is the man the Trump administration cajoled back into service when Ambassador Marie Yovanovitch was pulled out of Kiev at short notice. He’s the down-the-middle diplomat with military service who served under Republican presidents.
No wonder that he’s the guy Democrats are planning to bring up first when they begin open testimony in front of the American people next week.
It all comes down to the Senate
Senate Majority Leader Mitch McConnell was right when he predicted Tuesday that if a vote to remove Trump from office were to take place today, he’d be fine. If Democrats want to see Trump impeached, they must change minds.
CNN’s John King had an excellent analysis on “Inside Politics” about how quickly the impeachment effort is moving and how everything changes next week when they moving from fact-finding to the very public and more consequential portion of this.
“Think about watching a TV crime drama where you try to build your case,” King said. “Part of that is the factual evidence. But part of that is getting the jury’s attention.”
Can Democrats change minds?
“Are the Democrats ready to bring this public in a captivating way at a time when the American people are pretty evenly divided on the question of should you be doing this?”
Republicans prepare their counteroffensive
Rep. Jim Jordan, who is primed to be a key messenger for Republicans at open hearings, is already criticizing Democrats’ choice for their lead witness. He asked why Ukraine Special Envoy Kurt Volker, who abruptly quit his post at the beginning of the impeachment, isn’t the first one up.
“Democrats don’t want to call him as the first witness, even though he was the first witness to be deposed,” Jordan told CNN’s Manu Raju Wednesday.
Order of events:
Wednesday, Nov. 13: Bill Taylor, who saw quid pro quo, and George Kent, who was sidelined
Friday, Nov. 15: Fiona Hill, the recalled ambassador
Who’s who? Read this

Never mind the subpoena — What happens when you defy an impeachment subpoena? Sometimes, nothing. The House has withdrawn its demand to Charles Kupperman, the John Bolton aide who was on the July 25 Trump-Zelensky phone call in part because investigators don’t want to spend the time fighting over it in court.
Whistleblower objection — Kentucky Republican Sen. Rand Paul objected to an otherwise unanimous resolution (nonbinding, but still) to recognize the role of Congress and the White House in protecting whistleblowers. He called for media organizations to out the whistleblower during an event with Trump this week.
Why Pompeo dragged his feet — David Hale, a top official at the State Department, told the impeachment inquiry behind closed doors that Secretary of State Mike Pompeo did not forcefully defend Ambassador Marie Yovanovitch when she was attacked by Trump because it could hold up aid to Ukraine.
Turf battle — There’s disagreement in the White House over who should lead Trump’s impeachment communication strategy, reports Politico. The turf battle may be real, but is there any doubt that it will be Trump leading the strategy?

What are we doing here?

The President has invited foreign powers to interfere in the US presidential election.
Democrats want to impeach him for it.
It is a crossroads for the American system of government as the President tries to change what’s acceptable for US politicians. This newsletter will focus on this consequential moment in US history.
Keep track of documents and hearings with CNN’s Impeachment Tracker. See a timeline of events here. And head here for your full refresher on who’s who in this drama.