I’ve always been a bad friend. Or maybe, perhaps, it’s simply that being friends isn’t my forte. I mean, I consider myself a nice person. I’m polite, kind, honest, loyal. All the attributes of a good friend. Yet when it comes to being friends, I’m usually like, nah, I’m good.

Call it a loner, call it an introvert, call it anything, but don’t call me. That’s my motto. It’s not that I hate people; I love them actually, but I’m not sure I trust them. Can anyone relate?

I don’t think I’ve always been this way. I’m sure I wasn’t born this way. I’m certain that in the preschool play yard I was cordial and inviting, but somewhere along the way I developed the notion that most folks weren’t worth the effort. Well, now, that sounds harsh. People are worthy of my effort, but somewhere deep inside I fear my efforts will be in vain. I avoid the possibility of rejection, and I run from betrayal. Being left at an early age by a biological parent injured my confidence, I suppose, and an ugly and painful bout with bullying in junior high and high school left me distrustful of most females. I had found most women to be mean, backstabbing even, and I did not have time for such a thing. Non-confrontational by nature, I preferred no company to treacherous company.

Maybe it was growing up the new kid in the neighborhood. My family moved five times in less than three years. Or perhaps it was being the sick kid with epilepsy. Everyone thought seizures were contagious. Or maybe it’s just the fact that I was a weird, little kid. Quiet, contemplative, yet also so eager to please others. I desired love more than anything! I wanted acceptance, to be liked, to feel special. Sigh. If I’ve learned anything in forty-one years it’s this. Only God can give you the worth you desire. That doesn’t mean, though, that I didn’t spend a good thirty years or so seeking it via my fellow man. Better late than never I guess.

Anywho, whatever the root cause of my particular traits concerning friendships, in the end I came to a conclusion. The majority of people didn’t give me that warm, fuzzy feeling I craved. Instead they gave me quite the opposite. They hurt me. A person can only take so much hurt.

I became very selective in my friendships, especially with females.

I had one best friend from third grade through middle school.

In junior high I branched out. I tried the cool crowd. I hung out with groups. I did the whole cliquey scene. Yuck. As you can imagine, I got burned. I crawled back into my cave.

I finished junior high with one close girlfriend.

I experienced a major case of bullying despite keeping my head down. I guess sometimes it’s a jungle out there. Like how a hunting lioness will sniff out the lone, weak prey, so too was I targeted for high school annihilation.

I spent the rest of my high school years skimming the surface. What I mean by that is skimming the surface of relationships. I had a lot of “friends,” but I didn’t really have any friends, if that makes sense. I didn’t share my innermost feelings with any of them. I didn’t trust anyone. I had things going on in my home life, but I kept it all inside. I smiled on the outside; on the inside I cried.

I was the girl who could keep a secret. If cell phones would have been around back then, I would have been the girl who always texted you back. Immediately. No matter what. I wouldn’t ditch you, lie to you, or use you. I had the makings of a good friend, but I didn’t want that. It was too dangerous being someone’s friend.

In college I found a bit more freedom to be myself. I stopped pretending to go with the status quo. I found a world full of more people like me, and I made my first friend in a long time. She was my best friend, and I would have laid down my life for her.

Seasons change. People change. Marriages come, children come. New jobs, new cities. Sometimes friendships fade. Sometimes people don’t keep up with one another like they should. Life just gets too busy. Gosh, that hurts. It hurt then. I understood it, but it still hurt to try and hang on to a friendship that had moved on without me.

I would not entertain another female friendship for eighteen years! That’s weird, right?! I mean, I had a couple of gal pals I hung out with over the years. We laughed, we had a good time, but I didn’t invest in them like I could have. I was a bad friend. I don’t guess I knew how to be a good one. I didn’t want to know.

I spent years seeing these other women growing into adulthood and middle age with their tribe. They went on girl trips, they had girls’ night out. A part of me envied the photos of females smiling together for the camera, but I knew I couldn’t put myself in their place. To open your heart to female friendship also meant opening your heart to female drama, gossip, betrayal, heartache. I wanted none of that! I’d give up the happy nights out if it protected my delicate heart. So, a lot of time went by without a girlfriend in my life. I figured it was better that way.

Good friends are funny how they sneak into your life. My very first, true friend in third grade came up to me in the playground with the corniest comment ever.

She said, “why don’t they call a hurricane a him-a-cane? Why’s it got to be a girl storm?”

We were inseparable thereafter.

The same kind of friendship slipped into my forties. I can’t remember what corny thing my clever friend uttered, but I knew immediately she was my kind of weirdo. More importantly, I knew I could trust her. She made me comfortable, and I wasn’t afraid she would hurt me. She was my friend, almost immediately, and it came about very naturally. It was nice to say I had a friend outside of my husband and sisters. 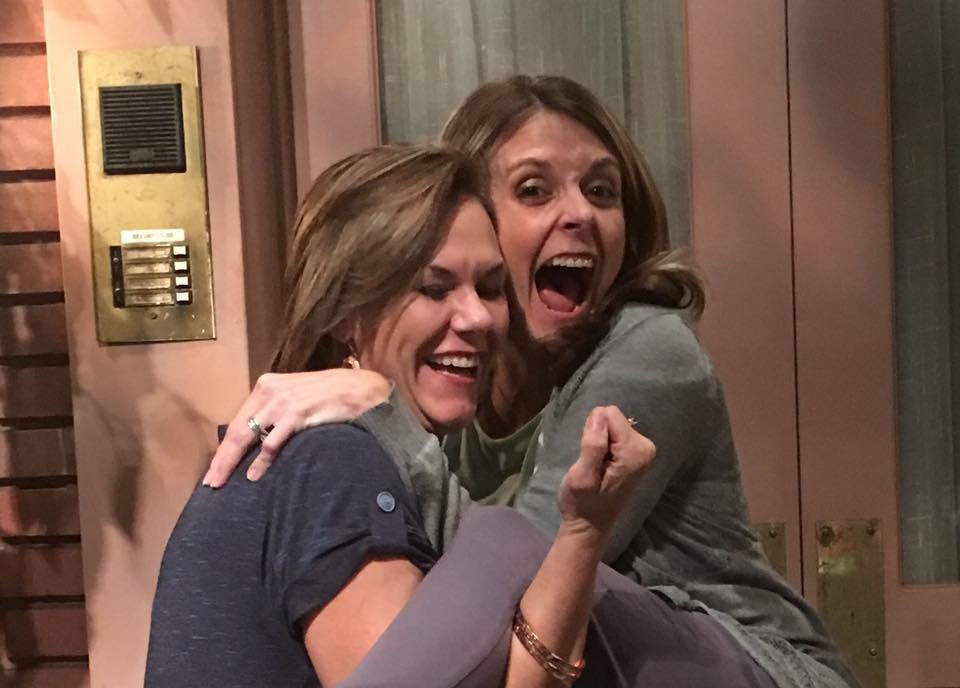 My bestie recently traveled a long distance to come see me. I liked how we fell into easy, relaxed conversation. That’s how it is supposed to be. This morning I thought about her. She had just flown out of the area. I thought about all the time I had let lengthen in-between our phone conversations.

I’m just not a good friend, I thought.

And at that moment I felt like God said, “but being a good friend is what I have for you.”

I haven’t always been a good friend, and perhaps it’s due to no fault of my own, but then I let it change me. I let bad friendships keep me from good friendships. I let past pain prevent future happiness. I gave up on something good God had for me. Well, I almost gave up.

I’ve decided God sends us the relationships we need exactly when we need them. He even slips them in if He has to, via a corny joke or business trip happenstance. He lines up relationships for His glory, but then it’s up to us to keep walking the path He put down. I haven’t always been good at being friends, but that doesn’t mean I have to stay bad at it. I can let go of fear in favor of faith in friendships. I’m trying anyway. Relationships can bring us pain, but they can also bring so much joy and laughter.

Read Next On FaithIt
‘I Don’t Fit in. They Don’t Really Want Me There. I Wonder Why I Wasn’t Invited. Circles Are Great if You’re on the Inside.’