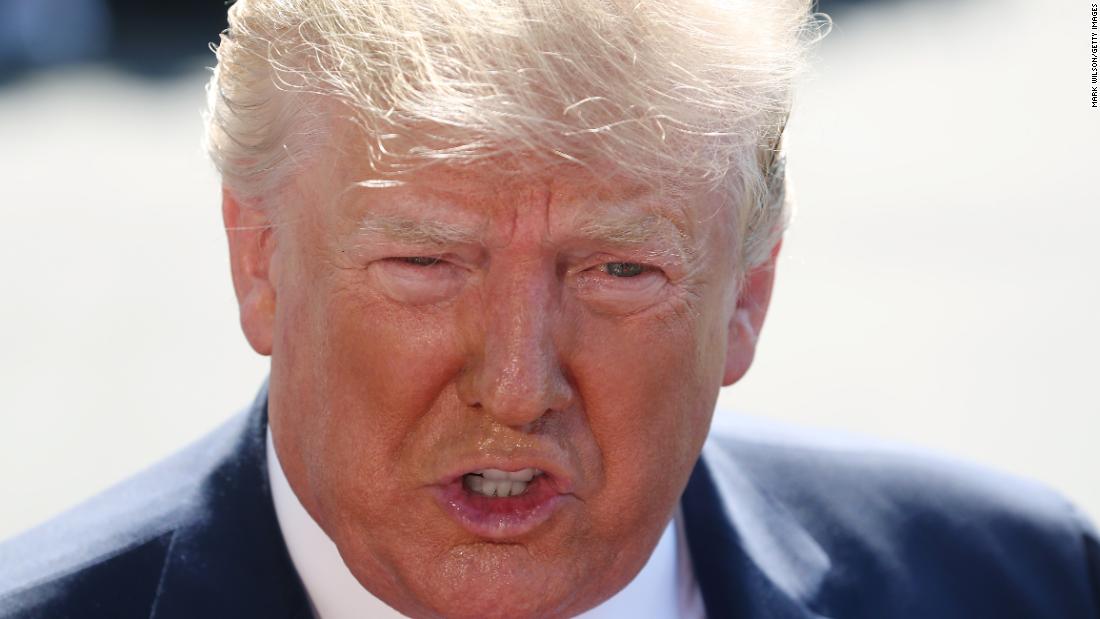 New York (CNN Business)A version of this article first appeared in the “Reliable Sources” newsletter. You can sign up for free right here.

By and large, no, most major news outlets did not do that. Reporters and anchors took the story seriously but largely leaned on “critics,” primarily Democrats, and cited their accusations of racism. The significance of Trump’s words risked being lost in a partisan fog.
He said/she said is a tried and true journalistic technique, of course, but it is insufficient at a time like this. If telling Democratic congresswomen to “go back and help fix the totally broken and crime infested places from which they came” isn’t racist, what is?
There were some exceptions — CNN chief among the news outlets — that called out this example of racism emanating from the highest office in the land in an authoritative, institutional voice. CNN’s banners and headlines said “racist rant” and “racist attacks.”

NYT TV critic James Poniezowik crystallized what I’ve been thinking all day. “A real problem is that politics in Trump’s era has taken on a moral dimension that news outlets either aren’t equipped to cover, or think it’s their duty to avoid,” he tweeted. “And if they avoid it, they avoid their job, which is to accurately represent to their audience what’s happening.”

How it was covered

So let’s size up how the nation’s most-read, most-watched news outlets handled the tweets. As I mentioned, CNN identified the tweets as racist throughout the day. Some MSNBC programs did, too. On Fox News, so far as I can tell, the word was only used by guests or attributed to critics.
The big three nightly newscasts used the “critics” crutch as well. “Democrats are calling the remarks racist,” ABC anchor Tom Llamas said. Later, he said Trump is “being called racist after firing off several tweets…” And the graphic next to him said “RACIALLY CHARGED TWEET.”
On NBC, Kate Snow said the “inflammatory” Trump tweet was different than most, “with many decrying it as racist.” A package by Hans Nichols quoted various condemnations from Dem lawmakers and said 2020 candidates “piled on” with criticism.
CBS was by far the weakest of the three, never getting close to the R-word. I was struck by this because the correspondent, Errol Barnett, did point out on Twitter that the hashtag #RacistInChief was trending. “President Trump took aim at a familiar target today, Democrats. This time, though, he aimed at four progressive lawmakers, all of them women of color,” anchor Elaine Quijano said. Quite a nonchalant way to describe a racist rant!
Newspaper websites, with the advantages of more space and time, gave more context. But there was still reluctance to reach any editorial conclusion. The LA Times said “it’s usually considered a racist taunt.” WaPo cited Nancy Pelosi, saying she “described them as racist and divisive.”
The AP’s headline was blunt — “Leave the US, Trump tells liberal congresswomen of color” — and its story noted Trump’s “long history of making racist remarks,” but left it to Democrats to say Sunday’s tweets were racist. Same thing at the WSJ: The homepage headline was “Trump Targets Lawmakers in Tweets Decried as Racist.” Later it was changed to say “Trump Targets Lawmakers in Racially Charged Tweets.”
I know that reporters in at least two newsrooms argued with their higher-ups about this language issue on Sunday. But in both cases they lost.
The NYT’s main story initially cited Dem criticism, but the top of its story was later strengthened to say Trump’s insult “was widely established as a racist trope.” Still: Widely established by who? Is it a racist trope, or not?
In a separate “news analysis,” Peter Baker went further, saying that “when it comes to race, Mr. Trump plays with fire like no other president in a century.” Here’s his piece…

Putting pressure on the press

This is just a sampling of the Twitter commentary I noticed on Sunday…
David Gergen said “it’s hard to recall this much bigotry and nativism in the White House since pre-Civil War.”
Ben Rhodes tweeted: “Trump launched his political brand 8 years ago saying the first African American President was born in Africa. It has always been about racism, and the fact that this has ever been a controversial thing to say is part of the problem.”
Sherrilyn Ifill ‏wrote: “Today’s Twitter thread by Mr. Trump may be the most appalling among thousands of appalling tweets from this President.”
Joy Reid wrote: “And now we all know him, so he feels comfortable letting it out in front of all of us.”
George Conway asked: “What would likely happen if anyone, even a CEO, made such a racist statement in any workplace in America?”

Another tweetstorm provoked by Fox & Friends?

Ilhan Omar, one of the presumed targets of Trump’s tweetstorm, was on stage with fellow lawmakers Rashida Tlaib, Ayanna Pressley and Deb Haaland at the Netroots Nation conference on Saturday. Media Matters’ Matthew Gertz noted that “Fox & Friends” ran a “DEMOCRATS DIVIDED?” segment and played soundbites from the conference “about 20 minutes before” Trump’s rant.
I also think it’s worth looking back a little further, to last Tuesday, when Tucker Carlson said Omar hates America and claimed immigrants like her are “dangerous” to America. Oliver Darcy and I talked about the Carlson-Trump connection on Sunday’s “Reliable…”
→ Reason’s Robby Soave told me on “Reliable Sources,” “it’s shameful that this faction of the pro-Trump right has seemed to actually embrace identity politics, something the right has long criticized as being bad for this country…”

The resonance of “go back”

As Darcy commented on “Reliable Sources” Sunday morning, people who are not white-skinned and blue-eyed know how it feels to be told to “go back where you came from,” and that’s what makes the rhetoric from Trump and his allies so repugnant.
“As a woman of color, as a Latina, I can say, I’ve heard these kinds of sentiments directed at me,” CNN anchor Ana Cabrera said on the air Sunday evening. But usually the people saying “go back” are hateful anonymous commenters. This time “these words are coming from the president of the United States,” she said, sounding genuinely taken aback.
Journalists, activists and ordinary citizens shared their experiences all over social media on Sunday. And the NYT asked people to send in recollections: “Have You Been Told to ‘Go Back’ to Your Country Even Though You Are American? Tell Us About It.“
→ Vox’s Jane Coaston said on “Reliable” that Trump’s underlying claim is that “to criticize this country means you are no longer able to be a representative of this country — which is a very strange thing for someone who in 2015 described America as a hellhole to say…”

CNN analyst Ron Brownstein speaking on Sunday afternoon: “Under Trump, the Republican coalition has become overwhelmingly centered on the voters and the parts of the country that are most uneasy with demographic change. There was polling from PRRI last year — 2/3s of Republicans now say that the growing number of immigrants threaten traditional American values and traditions. As opposed to 60% of the country, overall, saying that immigrants strengthen the society.”
Trump is centering the GOP “primarily on the parts of the country that are least comfortable with all of these changes,” Brownstein said. “And everything we are seeing — from the wall, which is symbolic in its own way of standing against change — to these raids, to the openly racist tweets, is an acknowledgment of that. And what’s striking is how few Republicans, however much they may grumble privately, have been willing to stand up against this redefinition of the party.”
Read more of Sunday’s “Reliable Sources” newsletter… And subscribe here to receive future editions in your inbox…

There’s so much more to say, but let me start to wrap up this section with Stephen Collinson’s analysis for CNN.com, which is leading the homepage right now. “The most shocking thing about Donald Trump’s racist tweets is that possibly the most fundamentally un-American outburst of modern presidential rhetoric did not come remotely as a surprise,” he wrote Sunday. “The second most shocking aspect of an episode that would have rocked any other administration is that the President knows he can trade in such base tactics because he will pay no price in a Republican Party cowed by his fervent political base.”

Keeping track of the no-comments

With Collinson’s point in mind, maybe more news outlets should follow the lead of the Tampa Bay Times, which made the lawmakers’ silence a story on Sunday afternoon. “We asked the offices of Florida’s four congressional representatives who are immigrants or the children of immigrants” for comment, Kirby Wilson wrote. As of Sunday at 11pm ET, the two reps who are Democrats have responded; the two Republicans have not. Wilson’s story leaves space for their answers and says “should they respond, this story will be updated…”