Eagle with swastika under its talons, recovered in 2006, was part of German battleships stern that sank off the coast 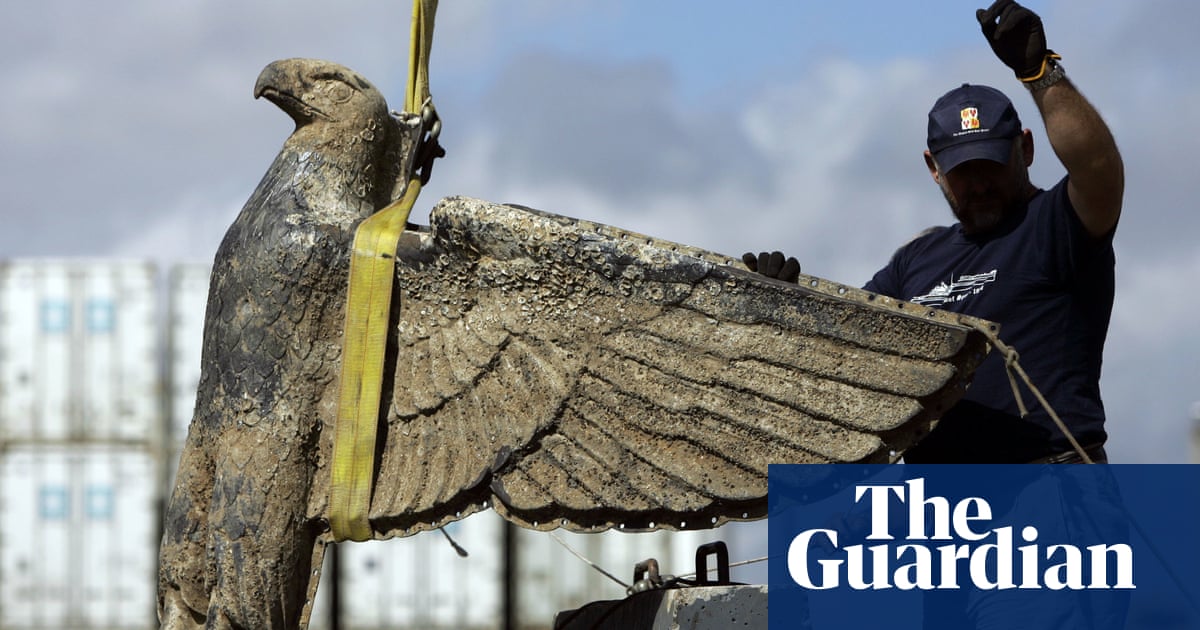 A court in Uruguay has ordered the countrys government to sell a huge Nazi bronze eagle that was recovered off the South American countrys coast in 2006.

The eagle with a swastika under its talons was part of the stern of the German battleship Admiral Graf Spee that sank off Uruguays coast at the outset of the second world war. The divisive symbol has been kept hidden inside a sealed crate in a Uruguayan navy warehouse for more than a decade.

The court ruled on Friday that it must be sold within 90 days and the proceeds must be split equally among the investors who organized the effort to recover the eagle from the bottom of the River Plate.

Everything was done following the law and under a contract, Alfredo Etchegaray, one of the businessmen whose company benefited from the decision, told the Associated Press.

Uruguays government can appeal the ruling. The defense minister, Jos Bayardi, told said the ministry will not comment until it has reviewed the decision.

Fresh debate around the eagle broke out after the government asked lawmakers and Uruguays Jewish community what it should do with the 800lb bronze piece. Some said it should be exhibited or auctioned; others believed that it should be hidden or destroyed.

The Graf Spee was a symbol of German naval might early in the war. It prowled the South Atlantic and sank several allied merchant ships before warships from Britain and New Zealand tracked it down and damaged it during the Battle of the River Plate that began on 13 December 1939.

The damaged Graf Spee limped into Montevideos harbor, where injured and dead sailors were taken ashore. Its captain ordered the ship scuttled, sinking it a few miles from the Uruguayan capital to prevent its then state-of-the-art technology from falling into allied hands. Most of the crew was taken by ship to Buenos Aires in neighboring Argentina and the captain killed himself there days later.

Private investors from the US and Europe funded a multimillion-dollar effort in 2004 to remove the ship piece by piece from the River Plate. The eagle was recovered by salvage team in 2006.

Thousands of curious people gathered at a hotel in Montevideo where it was displayed, although the exhibition lasted only a couple of months because of the controversy swirling around the divisive symbol.

Germany then said it was the rightful owner of the eagle and the vessel and opposed its sale, while Jewish groups asked that the swastika under the eagles talons be covered with a cloth. Finally, the eagle was stored in the navy warehouse in a sealed wooden crate.