Between the drink throwing, the cheating, and the verbal lashings these people dish out and take each week, the Vanderpump Rules cast has turned reality television into an art form. It almost makes us forget that they first flocked to Los Angeles to, ya know, follow their dreams of acting and modeling. These people have so, so, SO much to be ashamed of based off their show alone, but there’s even more shameful stuff in their past. Let’s take a look at the highlights of their slightly less embarrassing, hilariously underwhelming iMDb pages and lackluster portfolios before they became reality show riot-makers.

Kristen Doute Was In An Award-Winning Movie

Every struggling actress dreams of being in a movie that has received acclaim from the Michigan Film Awards or the Honolulu Film Awards. Turns out our very own Kristen Doute starred in a movie that got awards from both esteemed festivals, plus the highly coveted Golden Ace Award at the Las Vegas Film Festival! Why, oh why did she let her reality television show and T-shirt line get in the way of becoming the next Meryl Streep?

I honestly have no idea what’s going on in this trailer, so I really feel compelled to watch it in full to understand what the hell is going on. Plus, the lawyer in it seems like the kind of guy that would buy me a vodka soda at a Lower East Side bar and invite me back to “The Ski Lodge,” which is code for his Upper East Side apartment where he does tons of cocaine. This so happens to be my type, which means I am all in on this movie. The plot says that the movie is about a young artist and her lawyer’s lives intersecting, but all I see is a hot mess.

After watching this commercial, I’ve decided that Stassi is never allowed to make fun of Scheana’s showcases or makeup ever again. In fact, I don’t think Stassi is allowed to make fun of anyone else ever again because this commercial is a travesty. It consists of Stassi preening while wearing a makeover that I can only assume was given to her by someone who has a personal vendetta against her.

I thought her costume jewelry phase was her worst look ever, but then I saw Stassi wearing this sarong that was probably purchased at a Sandal’s Resort gift shop. And can we talk about that other white corset and underwear paired with black stockings? I don’t know about you, but when I think of beach apparel, I TOTALLY think of wearing something from the clearance rack from Frederick’s of Hollywood.

But to Stassi’s credit, you can tell she is totally over this commercial because she’s grooving to the music with the enthusiasm of someone waiting at the DMV. Can you blame her, though? This music is probably what they play while they put you on hold when you call a Hawaiian Holiday Inn Express. Based off the hair color she has in this commercial, I think this is around the time she was dating Jax and paying for all his bills. (Again, I know way too much about these people.)

Beau Was In A Lifehouse Music Video

The only reason I remember this song from the VH1 Top 20 Music Video Countdown is because the beginning chords were the reason I would switch the channel until this song was over. So no, I have not seen in in full and that’s why I never made the connection that Beau was in this video. He’s so adorable here, even if his #OOTD was a PacSun T-shirt over a long sleeved T-shirt. Hey, that was the “style” at the time! We could’ve gone without the attempt at Pete Wentz hair gone wrong, though. However, Beau’s not adorable enough for me to make me endure a song by a band that’s like Maroon 5, only not fueled by Monster Energy Drinks and a secondhand high from fumes of too much hair products.

Lisa Vanderpump Was In An Episode Of ‘Baywatch Nights’

We honestly though Lisa could do no wrong until we saw that episode of her in Baywatch Nights. Not Baywatch. Baywatch Nights, the knock-off version of Baywatch that starred David Hasselhoff (because it’s not like he has anything better to do) and the chick from Agent Cody Banks (I’m sure she’s done other stuff but that’s all I remember her for). Lisa played a manager of a posh beach club that is constantly clad in pink. So essentially, she was playing herself. Surprisingly enough, however, she played the villain for once because she couldn’t persuade the producers to give her a good edit like she usually does. And I forced myself to watch the episode until I finally caught a glimpse of the HBIC herself. And TBH, I continued to watch the show because for some reason I just couldn’t stop. It was an over the top train wreck starring ridiculously good-looking people with a SoCal backdrop. Does this sound like a familiar formula for trashy television to you?

In her older Instagram stories, Lala was pretty open about how she used to model for um…lower end lines back in the day. I mean, check out these prom dresses: 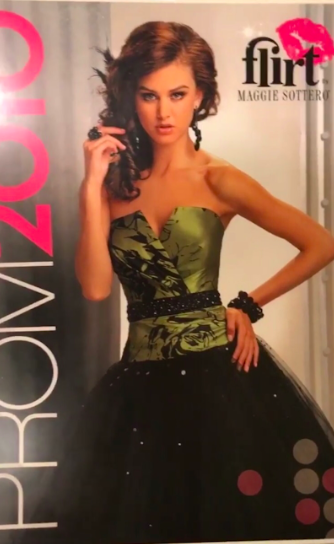 Lala also dabbled in modeling for tops they sell on Groupon, but you can only see the bottom half of her face. I say this as someone who judges almost everyone for almost everything: I’m not hating on her for modeling for lower end clothing lines. I can’t hate on her for shilling an inexpensive top that would be perfect for any woman trying to cover up the fact that they’ve given up on their diet for the past couple of days. I understand having to pinch pennies, because just last week I had to spread buying a bottle of water over two credit cards. However, I am side-eying her for throwing shade at flying coach and having 50 different names for “private jet” when she modeled clothes that aren’t exactly Fendi.

Also, I’m judging her for modeling in this sex pill ad too. It’s not the sex pill ad I’m hating on, it’s the guy she’s pretending to be attracted to. If this low-rent Dan Bilzerian unbuttoned one more button, he’d look like J.Lo at the Grammy’s in 2000. 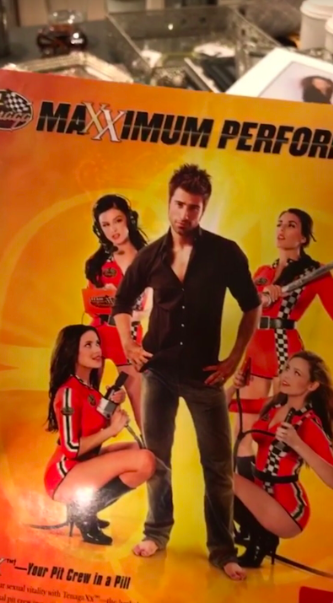 Katie Was In ‘He’s Just Not That Into You’

I kind of remember seeing He’s Just Not That Into You because it was 2009 and I was doing whatever I could to support Jennifer Aniston’s rocky transition from television to film. Turns out, Katie had a blink-and-you’ll-miss-it cameo as a girl who nodded a few times and looked vaguely sympathetic while rocking a serious “I’d like to speak to your manager” haircut. Katie should really teach a seminar on method acting.