The tug-of-war between stocks and bonds is at the heart of the shakeout roiling financial markets. This week’s U.S. inflation report could hold the key to the next phase.

Whether you want to say Treasuries are in a bear market or not, the surge in yields to start 2018 has left investors reassessing the value of equities and corporate bonds. Profits were easy when the 10-year yield traded in its narrowest range in a half-century, inflation stayed subdued and volatility across financial markets plumbed record lows. Gains are harder when low rates, a linchpin of the post-crisis recovery, start to disappear. 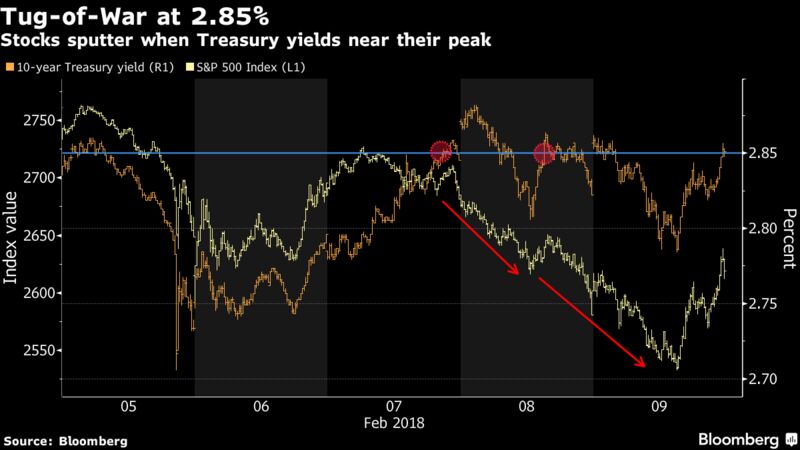 “What’s happening now is just price discovery between bonds and equities — how far can the bond market push yields up before the equity market cracks?” said Stephen Bartolini, portfolio manager at T. Rowe Price, which manages more than $10 billion in inflation-protected strategies. “The big fear in risk markets is that we get a big CPI print and it validates the narrative that inflation is coming back and the Fed is going to have to move faster.”

The focus on inflation is nothing new, but it became even more critical after a Feb. 2 report showed average hourly earnings jumped in January at the fastest pace since 2009. That contributed to the dive in stocks. (It also led President Donald Trump to tweet about the “old days” when stocks would go up on good economic news.)

Wage growth has been considered the missing link in an economic recovery that’s driven the jobless rate to the lowest level since 2000. With inflation appearing to be heating up, traders are pricing in more than two Fed hikes this year. At one point this month, before the stocks meltdown, traders were practically in sync with policy makers’ projection of three rate increases in 2018.

Add increased Treasuries issuance to the mix, and higher yields could be in the cards, perhaps to the chagrin of the stock market.

To be sure, there are bond bulls who are plenty skeptical.

“The Treasury market is pricing in the most bearish scenarios that were on the docket for 2018, and still 10-year yields remain stubbornly below 3 percent,” BMO Capital Markets strategists Ian Lyngen and Aaron Kohli wrote in a Feb. 9 note. To them, there’s a greater risk of yields declining over the next several months than rising.

After all, for all the hand-wringing, market-based expectations for consumer-price growth over the next decade have tumbled. And the consumer price index is projected to have slowed last month on an annual basis.

The risk, of course, is a strong CPI reading. That could push the 10-year yield toward 3 percent, from 2.85 percent now, the BMO analysts said. At least some speculators expect such an outcome: Block trades in puts on 10-year Treasury futures Friday pointed toward demand for protection against yields rising to that level by March 23.

Jim Platz, who helps oversee American Century Investments’ $3.1 billion inflation-adjusted bond fund, cautions against overreacting to one inflation report. Three-month averages are more telling, he said. He expects CPI to grind higher to 2.4 percent by April, from the 1.9 percent projection for January.

Taking a longer-term view is probably prudent. But as markets proved last week, that may be asking too much right now.

What to Watch This Week