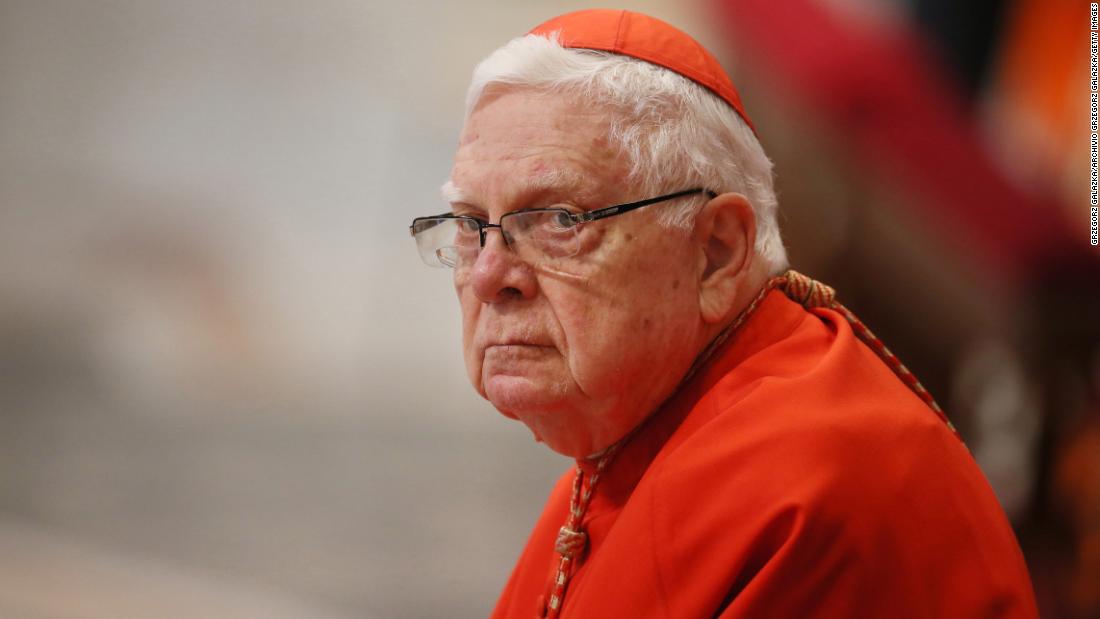 (CNN)Cardinal Bernard Law, the former Boston archbishop who resigned in disgrace during the Catholic Church’s sex abuse scandal, has died, the Vatican confirmed. He was 86.

Law died early Wednesday in Rome following a long illness, the Vatican said. Law moved to Italy to serve as archpriest of the Papal Liberian Basilica of St. Mary Major after he was forced to resign in 2002 as archbishop of Boston.
Law’s name became emblematic of the scandal that continues to trouble the church and its followers after a Boston Globe investigation revealed that he and other bishops covered up child abuse by priests in the Boston Archdiocese.
Law at the time apologized to victims of John Geoghan, a priest who had been moved from parish to parish, despite Law’s knowledge of his abuse of young boys. Geoghan was convicted in 2002 of indecent assault and battery on a 10-year-old boy. 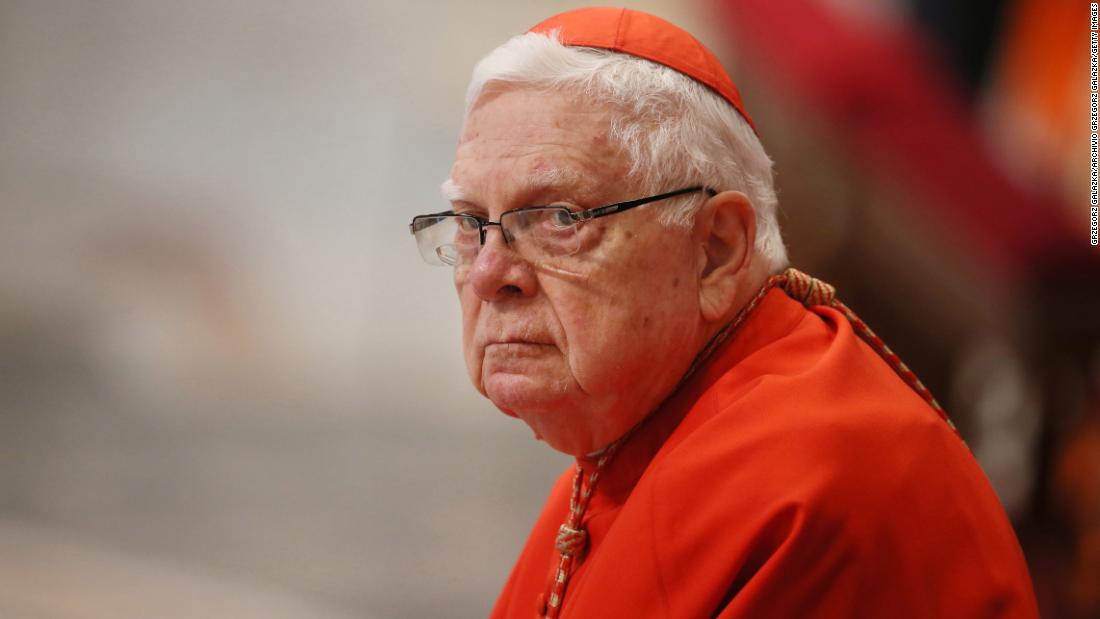 Law never faced criminal sanctions for his role in allowing abusive priests to remain in parishes. The scandal reverberated through the church, exposing similar allegations worldwide that compromised its moral authority and led to years of multimillion-dollar settlements.
Law will get a full cardinal’s funeral at the Vatican’s St. Peter’s Basilica on Thursday afternoon, with Cardinal Angelo Sodano, dean of the College of Cardinals, presiding.Pope Francis will give a “final commendation,” or blessing, as he has for cardinals’ funerals previously.

To his detractors, Law’s second career at the Vatican was a slap in the face to victims of clergy sex abuse, one that further undermined the church’s legitimacy.
“Survivors of child sexual assault in Boston, who were first betrayed by Law’s cover-up of sex crimes and then doubly betrayed by his subsequent promotion to Rome, were those most hurt,” according to a statement after his death from Survivors Network of those Abused by Priests. “No words can convey the pain these survivors and their loved ones suffered.” 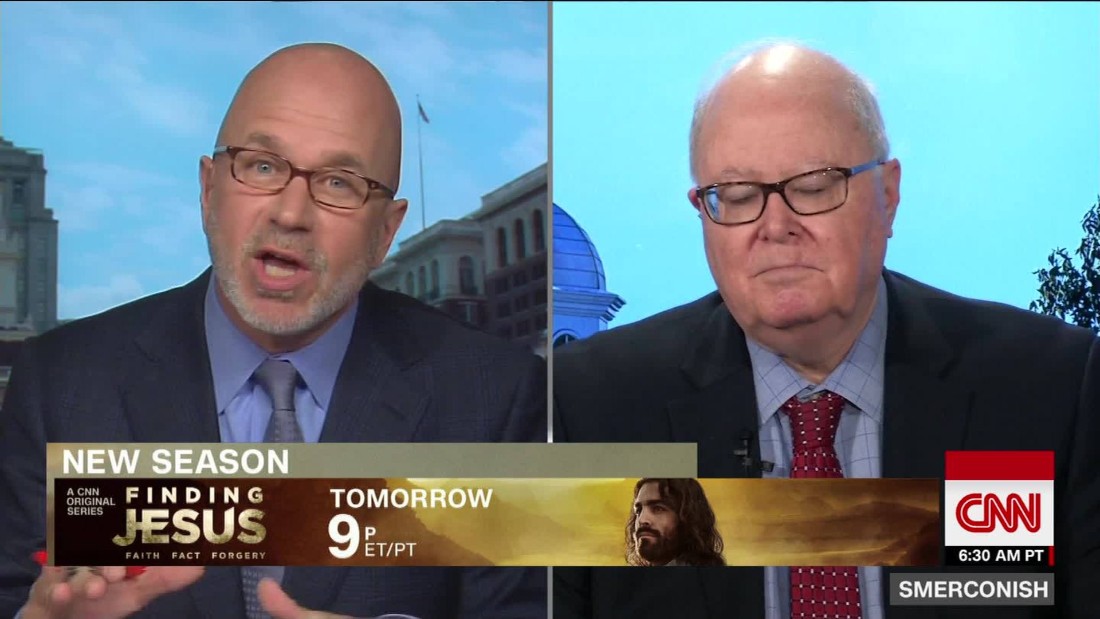 The group advised the Vatican to keep the abuse survivors in mind when planning Law’s funeral.
“Every single Catholic should ask Pope Francis and the Vatican why,” the survivors’ group said. “Why Law’s life was so celebrated when Boston’s clergy sex abuse survivors suffered so greatly? Why was Law promoted when Boston’s Catholic children were sexually abused, ignored, and pushed aside time and time again?”
Widespread child abuse by the Catholic clergy in the Boston Archdiocese was uncovered by The Boston Globe’s Spotlight investigative reporting team, which won a Pulitzer Prize for its efforts. A big-screen dramatization of the team’s investigation in the 2015 movie, “Spotlight,” won the 2016 Best Picture Academy Award, bringing the story to a much wider audience.
TIMELINE: A look at the Catholic Church’s sex abuse scandals
Law’s successor as Boston’s archbishop, Cardinal Sean O’Malley, reacted to Law’s death in part by apologizing to victims of sex abuse by clergy.
“I recognize that Cardinal Law’s passing brings forth a wide range of emotions on the part of many people. I am particularly cognizant of all who experienced the trauma of sexual abuse by clergy, whose lives were so seriously impacted by those crimes, and their families and loved ones,” O’Malley said.
“Cardinal Law served at a time when the church failed seriously in its responsibilities to provide pastoral care for her people, and with tragic outcomes failed to care for the children of our parish communities. I deeply regret that reality and its consequences,” O’Malley said.
However, he called it a “sad reality” that the scandal has come to define Law’s legacy, overshadowing his work in the civil rights era and leadership in the interfaith movement following the Second Vatican Council.
“I think all of us are more than one dimensional and I think, to be realistic, we have to recognize that there was more to this man than his mistakes,” he said in a news conference on Wednesday.

Law was born in Torreon, Mexico, on November 4, 1931, to Helen and Bernard Law, an Air Force colonel. He completed his postgraduate studies at St. Joseph’s Seminary in Louisiana and at the Pontifical College Josephinum in Columbus, Ohio. He was ordained as a priest on May 21, 1961, in the diocese of Natchez-Jackson, Mississippi, and became vicar general of that diocese in 1971.
In 1973, he was appointed bishop of the Springfield-Cape Girardeau diocese in southern Missouri. He served as chairman of the Bishops’ Committee on Ecumenical and Interracial Affairs, and in 1976, he was named to the Vatican Commission on Religious Relations with Jews.
The posts were stepping stones to his becoming the spiritual leader of Boston’s large and influential Catholic community. In 1984, Pope John Paul II appointed Law to be the archbishop of the Boston Archdiocese, with its 362 parishes serving 2.1 million members. That same year, Law received a letter from a bishop expressing concerns about then-Rev. Geoghan. Law assigned Geoghan to another parish despite the allegations.
In 1985, Pope John Paul II elevated Law to cardinal, one of just 13 Americans holding that office at the time. 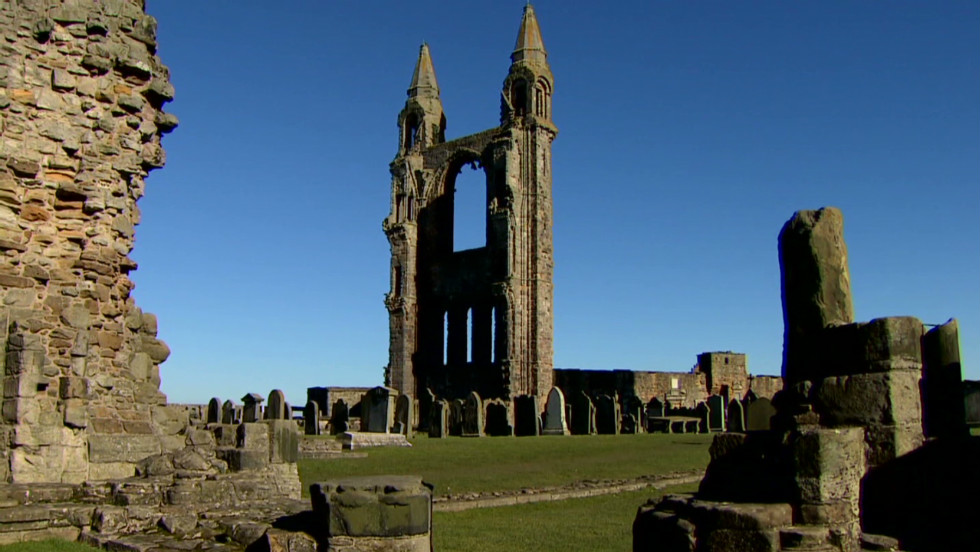 Law attempted to resign as archbishop of Boston in April 2002, but Pope John Paul II rejected his request. In 2002, a judge presiding over the child rape case of the Rev. Paul Shanley ordered Cardinal Law to be deposed by lawyers of one of Shanley’s victims.
Law testified about his supervision of Geoghan in 2002, saying he relied on his assistants to investigate charges of abuse. In May 2002, he apologized for his role in the clergy abuse scandal in a letter distributed throughout the archdiocese. But he denied knowledge of sexual abuse allegations against Shanley until 1993.
In August 2002, Law appeared in court to testify about a settlement reached between the archdiocese of Boston and victims of clergy abuse. The archdiocese rescinded the monetary offer shortly afterward.
That December, as calls grew for him to resign, Law was subpoenaed to appear before a grand jury investigating “possible criminal violations by church officials who supervised priests accused of sexually abusing children.” Days later, he resigned as chairman of the board of trustees of the Catholic University of America, followed by his resignation as archbishop of Boston.

The breakdown of trust in the Catholic Church continues to reverberate around the world. 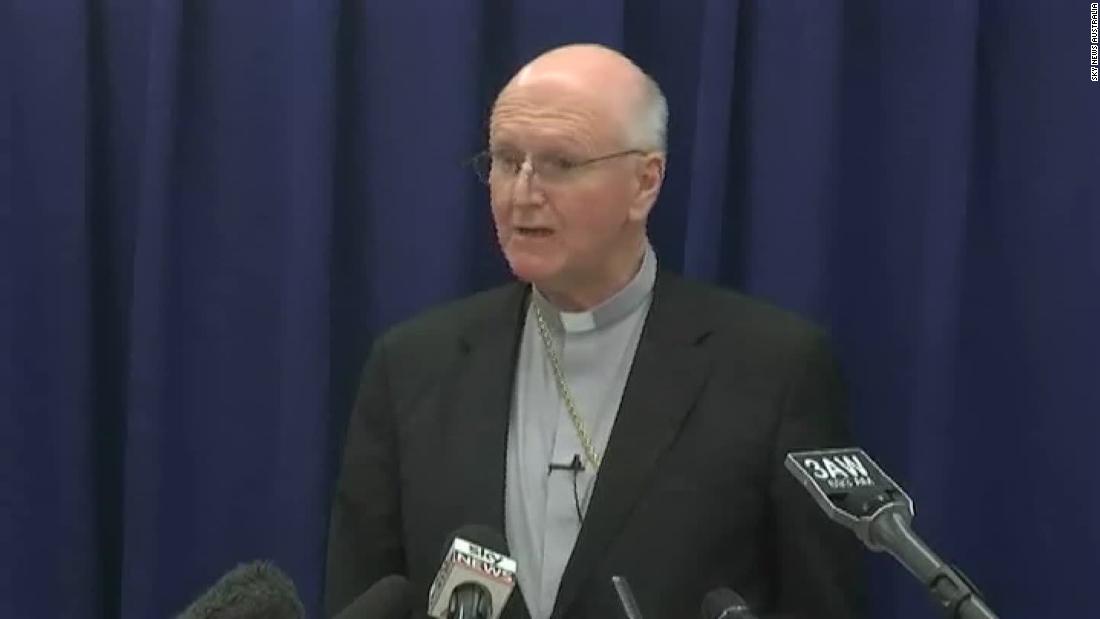 Archbishop: ‘This is a shameful past’

This month, the Australian Royal Commission into Institutional Responses to Child Sexual Abuse delivered, after five years of work, 189 recommendations to address what it described as a “serious failure” by Australia’s institutions to protect its most vulnerable citizens.
The country’s senior Catholic leaders, however, rejected recommendations by the wide-reaching investigation, declining to end mandatory celibacy for priests and break the secrecy of confession.
Of survivors who reported abuse in a religious institution, more than 60% said it occurred in a Catholic organization, the report found.
When asked if he forgave Law, O’Malley said that forgiveness is what Christianity is all about. But he acknowledged that in Law’s case, forgiveness did not come easy.
“Hopefully, out of this, it will help to remind all of our Catholics that this is not something that has been solved,” he said Wednesday. “The healing is still necessary and we must all be vigilant, particularly for prevention of child abuse.”
He surmised, though, that the church would handle such transgressions differently today.
“I think there’s a much greater understanding and sensitivity to the situation,” he said. “There’s been enough growth and consciousness of this problem in the Holy See that that would not happen.