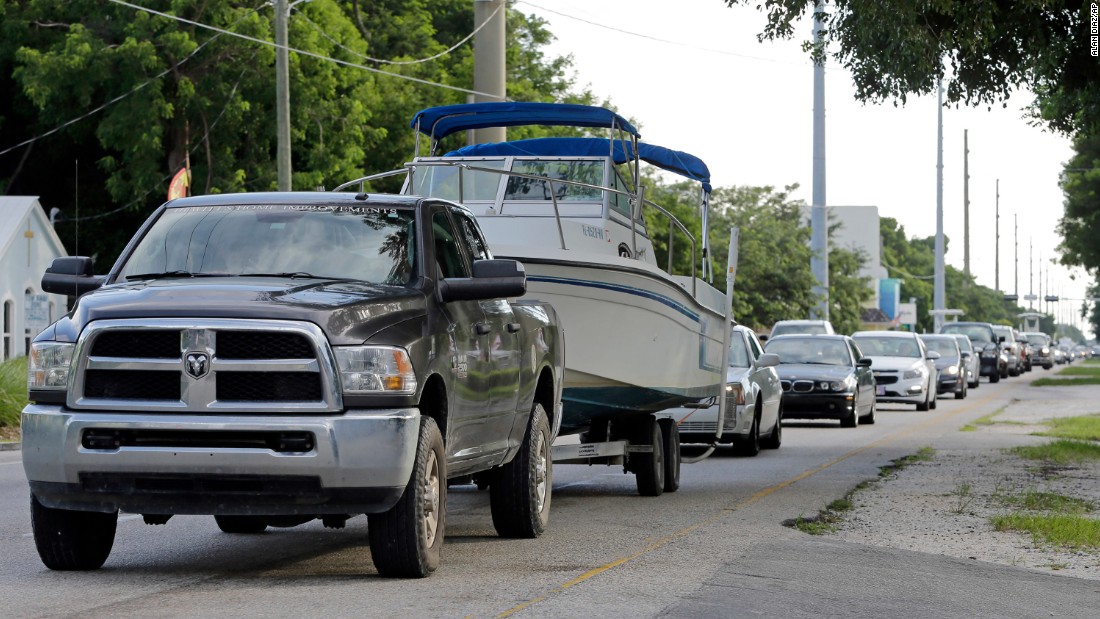 (CNN)Residents of the Miami area and the Florida Keys streamed north in packed vehicles Friday, anxiously rushing to dodge Hurricane Irma as the deadly storm took aim at the state after devastating the Caribbean.

The dramatic mass exodus from South Florida could become one of the largest evacuations in US history, CNN senior meteorologist Dave Hennen said. Miami-Dade, Broward and Palm Beach counties are home to about 6 million people combined.
But the clock is ticking for those who haven’t left yet, officials warned.
“Get inland for safety,” Gov. Rick Scott said.
The National Hurricane Center predicted that Irma could strengthen into a Category 5 storm again before it hits the Florida Keys this weekend.
“Based on what we know, the majority of Florida will have major hurricane impact and deadly winds. We expect this along the entire east coast and west coast,” the governor said at a news conference. “All Floridians should be prepared to evacuate.” 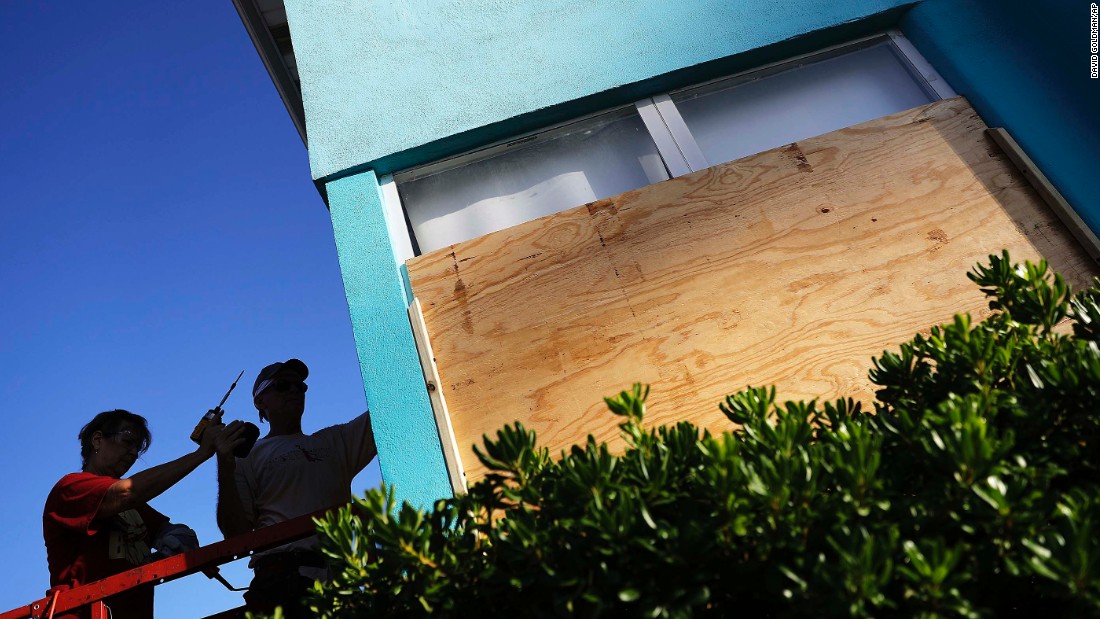 Thousands of motorists braved clogged roads, backups and slowdowns to get out. Some drivers waited for hours at gas stations, some of which ran out of fuel.The Florida Highway Patrol escorted fuel tankers so they could reach and resupply gas stations, the agency reported.
Travel hot spots included interstates 10, 95 and 75, and Florida’s Turnpike. Troopers monitored roadways, stepping in to help after fender-benders and with disabled cars and trucks. 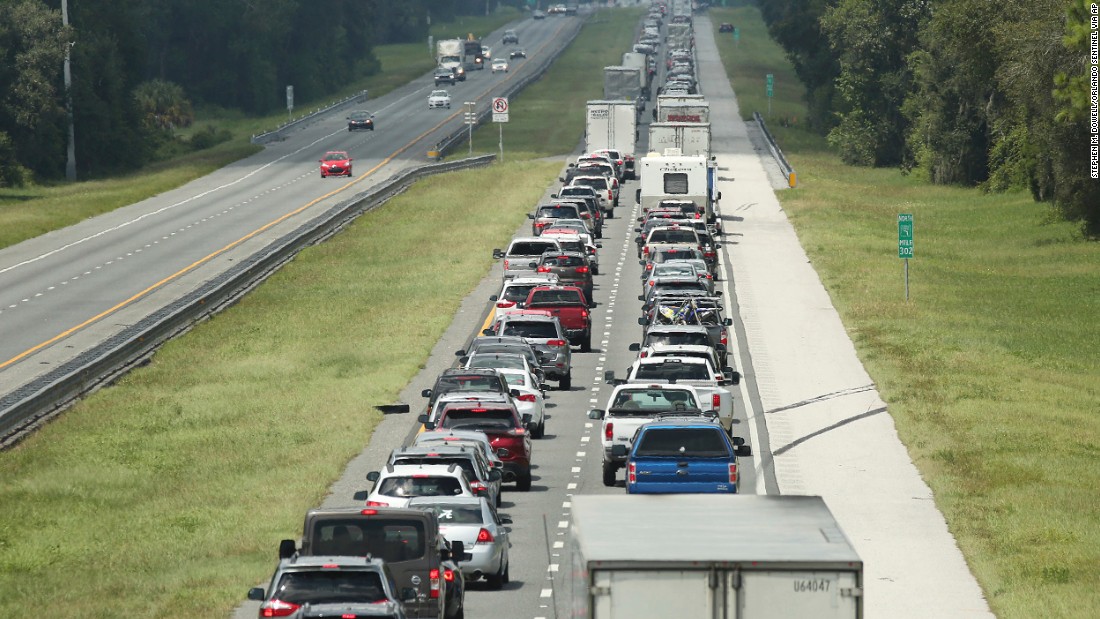 Yesenia Rivera left the Jacksonville Beach area Friday and, three and a half hours later, was traveling west on Interstate 10 near Lake City, Florida. “There is still severe congestion and stop-and-go traffic all the way to Tallahassee,” she told CNN.
Many Floridians were streaming north to Georgia, and transportation officials said long areas of congestion were occurring on segments of I-75 northbound and I-95 northbound. The statement warned that motorists heading to the Atlanta region and places farther north should expect a longer than normal drive — as long as four hours of extra travel time between Florida and Atlanta.
“Thousands” of vehicles were causing bumper-to-bumper traffic in the northbound lanes of Interstate 95 south of Savannah, Georgia, late Friday, CNN senior producer Bill Kirkos reported.
He said the parking lots of gas stations and truck stops were filled with parked cars, although it appeared stations had gas supplies and short lines.
Heading in the opposite direction, toward Florida, were utility trucks with out-of-state license plates, including a handful with Massachusetts plates, Kirkos said. 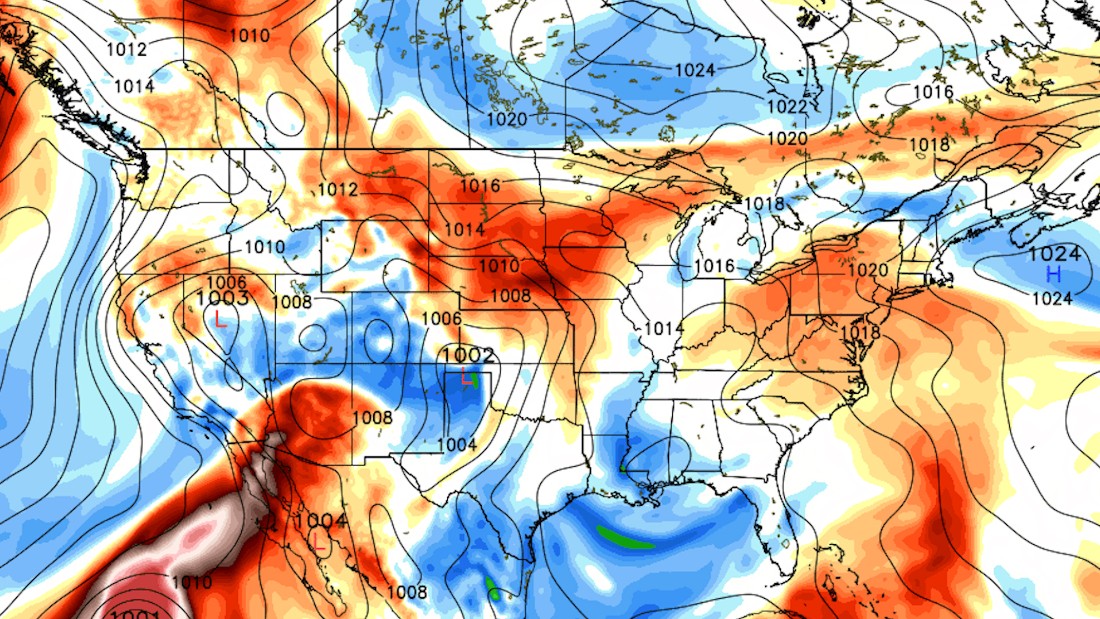 The Georgia Department of Transportation suspended construction on interstates and state routes due to the expected surge of traffic from Florida. Construction will resume on Wednesday.
In Florida, mandatory evacuation orders covered parts of Miami-Dade County, Broward County east of US 1, Palm Beach County, low-lying parts of Brevard County, coastal and low-lying areas of Jacksonville and Duval County, and Monroe County, home to the Florida Keys.
The evacuation of Miami-Dade County was the largest in the county’s history, with an estimated 660,000 people asked to leave, Mayor Carlos Gimenez said.

Some people heard officials’ dire admonition loud and clear.
“If you don’t heed the warning, you could die,” Key Largo resident Don Anderson told CNN. “This is your life. What’s it worth? You can always party later.”
Ignoring official advisories, other residents stocked up on supplies and prepared to ride it out.
“I have been here 15 years and been through so many storms. We have been told many times to evacuate,” said Scott Abraham, who lives on the 11th floor of a building on Miami Beach. “I don’t think it’s going to hit us directly. If it does, I think we are safe. We have food. We have supplies. We have everything we need.”
“We are ready to rock and roll with the storm,” he said.

Flying out of the storm zone

Some Floridians unwilling to risk chaos on the highways opted to try to fly out of town. Delta Air Lines added flights out of Miami, Fort Lauderdale and Key West to Atlanta, its largest hub, and allowed passengers affected by Irma to rebook flights for free, the airline said.

American Airlines and United Airlines also waived change fees for passengers impacted by Irma, the airlines said.American planned to wind down operations Friday afternoon at its Miami hub, as well as in other south Florida cities, then to cancel flights throughout the weekend, the airline said.
Irma’s impending landfall had forced airlines serving some of the nation’s largest airports to plan to shut down operations. By late Saturday, Miami, Orlando and Fort Lauderdale — home to the 12th, 13th and 21st largest airports in the US, respectively — were expected to be largely dormant.

Stranded at the airport

Kevin Brokbals, who hails from Germany, was among several dozen people who spent the night on cots at Miami International Airport. He planned to be stuck for a while and said airport officials hadn’t given much sense of his options.
“The airport didn’t tell us anything,” he said. “We asked some police officers to give us any information because there was no one officially from the airport.” 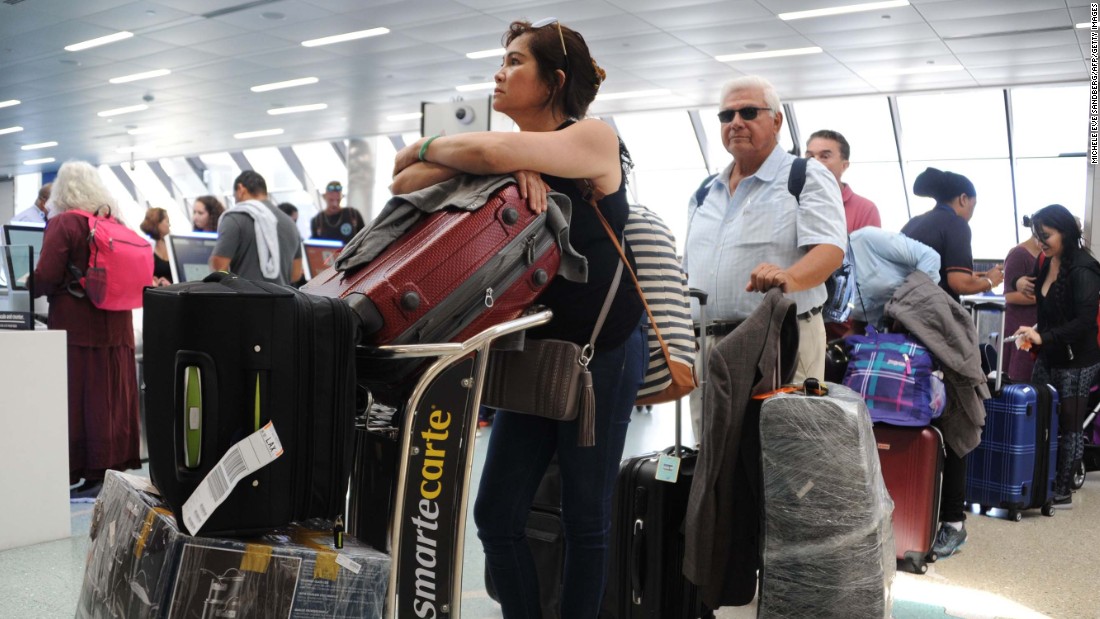 First, he and others were told they had to leave the airport and head to a shelter. Then, they were told all shelters were full.
“And we have to stay here,” he said. “We can’t stay upstairs because there are too many windows, too many glasses which can break. And that’s why they want all the people in one area, even though it’s not a shelter.”
Leila Traversoni, of Argentina, visited Miami to shop for her wedding dress and a tuxedo for her fiancé. The couple is desperate to get back home; they’ve never been through a hurricane.
“I am very afraid,” Traversoni said. “I am terrified. I don’t know what to do. We don’t have any place to go. We are looking for a shelter.”
Traversoni said she’s hoping for an answer from American Airlines or airport staff.
“We don’t know what to expect,” she said. “We are really, really terrified because we don’t know what to do, where to go — just praying at this point.”

Other people planned to stay put to protect their homes.
“I evacuated Matthew,” one Merritt Island resident said, referring to last year’s hurricane. “I feel this is going to be a Category 2 or 3 by the time it hits us. I’ve got a pretty strong home, so I’m pretty confident it will survive.”
Wary of tornadoes, though, he said he could change his plans if it looks like Irma could strike as a Category 4 or 5 storm.
“I’m watching the weather and the news and keeping track with the storm,” he said. 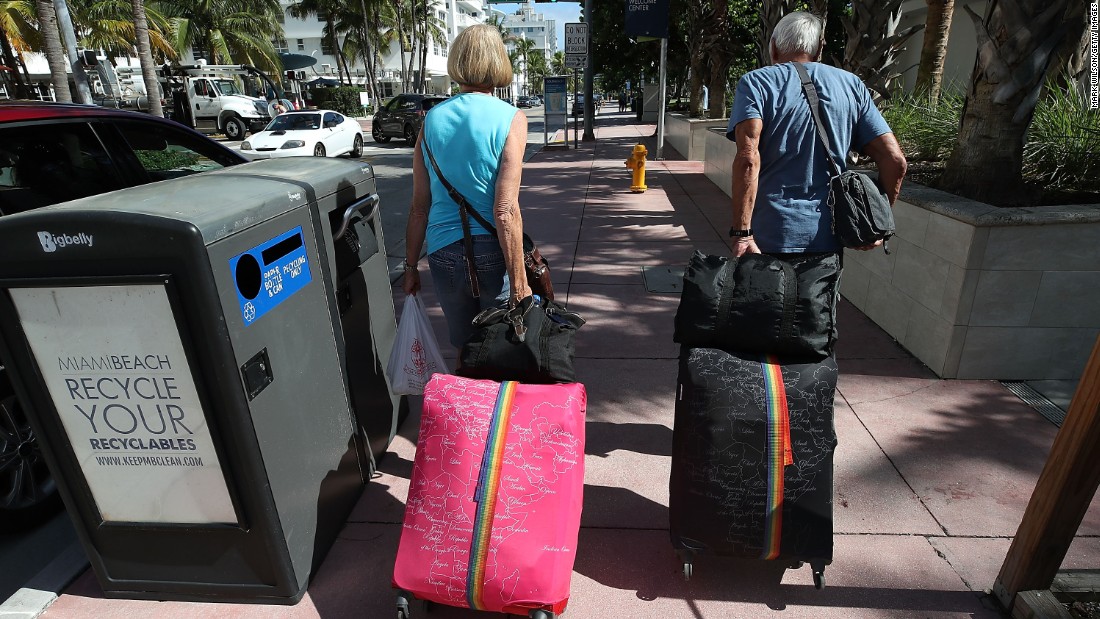 Linda Blackshear, who lives in South Florida, also planned to stay. She doesn’t live in an evacuation zone, she said, and her grandson lives with her.
“I feel safe,” she said, adding that she has no place to evacuate to. “I have all the supplies and all the essentials.”

By Friday, tropical storm-force winds from Irma covered more than 65,000 square miles — about the area of all of Florida, and the National Hurricane Center had issued hurricane and storm surge warnings for South Florida. Irma’s cone of potential landfall included almost the entire state of Florida, meaning residents would not be able to flee to the state’s Gulf Coast to avoid its wrath. 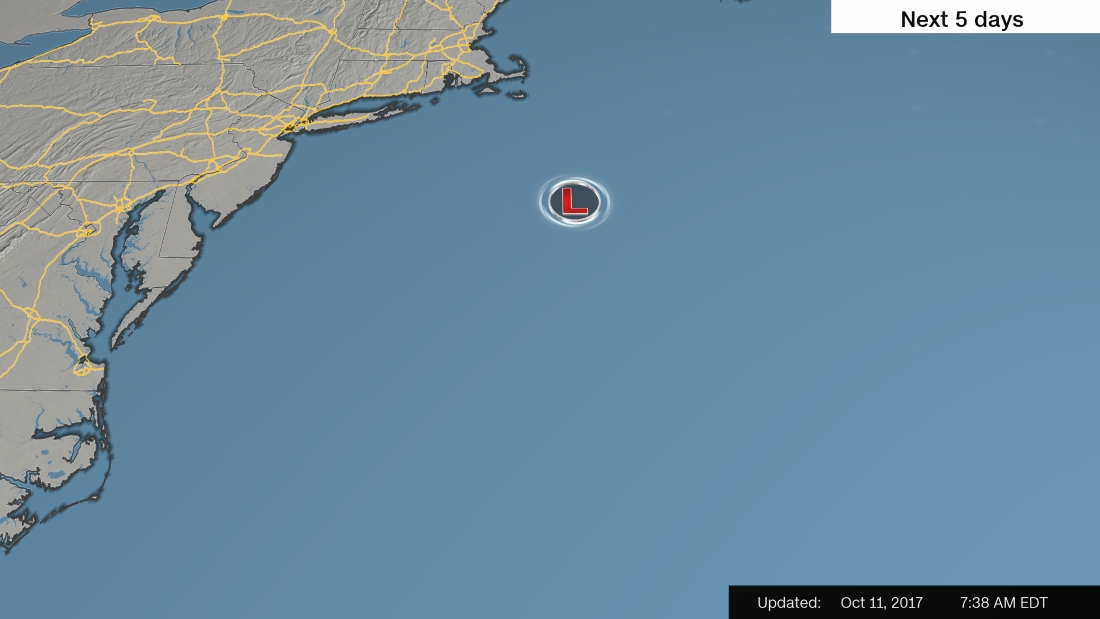 As the storm plodded toward the United States, more warnings echoed from public officials and experts:
Without knowing exactly where Irma would make landfall, governors in Georgia and South Carolina decided not to take chances, ordering mandatory evacuations of low-lying coastal areas around Savannah and Charleston.